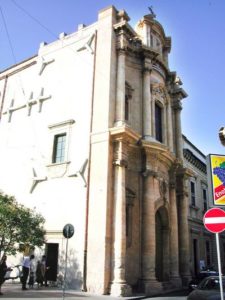 The Convent and Church of Our Lady were founded in 1532 in the highest part of the city, known as the Suso or Castle district, at the behest of the Marquis of Avola Giovanni d’Aragona Tagliavia, under licence from Pope Clement VII. Having been destroyed by the earthquake of 1693, the two buildings were relocated to the block in the north-western corner of the new city layout. The first stone was laid on 11 March 1697, and in 1702 the Benedictine convent welcomed the nuns that had survived the earthquake. However, it soon proved to be inadequate, and in 1715 both the dormitory and the church were rebuilt.

In the mid-eighteenth century the abbess Gertrude Azzolini decided to rebuild the church elsewhere in the conventual seat in the Baroque style. Works on the front, planned in 1753 and started in 1754, ended in 1769.
The façade is one of the finest and most important in Val di Noto, and was designed by architect Rosario Gagliardi (Syracuse 1688?-Noto 1762). The building has a convex central section and concave sides, of Borromean inspiration, with columns with Ionic and Corinthian capitals. The vertical part of the building is formally balanced by the magnificent cornice with chiaroscuro accompanying the sinuous shape of the façade. This is topped by the bell-chamber and a balustrade in soft limestone with finely carved tracery work – an excellent example of late-Baroque architecture by the master builder of Avola Benedetto Alessi. 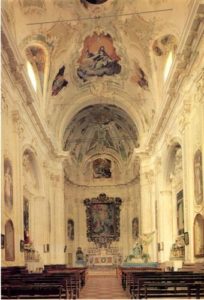 Inside the Abbey, as the church is often called, there is a nave decorated in elegant colours and splendid stuccowork dating back to 1777 typical of the European Rocaille culture by Serafino Perollo, an artist of Swiss origin who settled in Nicosia. The altars and choir were designed by the architect and priest Giuseppe Alessi (Avola 1739-1824).

The walls of the nave are completed by twelve female allegorical figures set in stucco frames and “dry” painted in tempera on plaster. These represent the Theological and Cardinal Virtues. The vault has a succession of paintings in large frames using the same technique representing the Resurrection, Charity, the Glory of Mary with saint Benedict, Saint Scholastica and saint Joseph beating Heresy (there is a similar work in the Church of St. Anthony the Abbott) and Faith. The nave near the presbytery is dominated by the main altar in polychrome marble with putti and statues in white marble. The end wall features the large canvas of the Annunciation with its sumptuous wooden Baroque frame. The lunette in the apsidal conch above it contains a painting of the Trinity.

The four smaller altars in the church contain 18th-century oil paintings on canvas attributed to the artist from Noto Costantino Carasi. On the left they depict the Deposition and Our Lady with Child and Saints; on the right the Glory of saint Theresa and saint Clare and the Glory of saint Benedict.

Next to the present-day Church of Our Lady the convent buildings were rebuilt in 1888 to designs by the architect Salvatore Rizza for use as a public school. The Municipal Market, today the City Library, was built in the former convent garden in 1895.