Side chapels and works

SIDE CHAPELS AND WORKS

The interior of the great Church of St. Nicholas has a nave and two aisles, flanked by round arches alternating with responds topped by Corinthian capitals.

The first chapel in the left aisle contains the baptismal font in white marble that was made in 1787 by Giuseppe Bonaventura from Catania. A raised floor in fine majolica dates back to the eighteenth century. It has a double floral border and was made in Naples by the famous Attanasio ceramicists.

The second chapel used to contain the tomb of the Bonincontro family. There is a wooden statue of Saint Michael the Archangel on the altar, which is known to have been in the church since 1722.

The third chapel belongs to the Loreto family, and contains baroque stucco decorations and the painting with Our Lady of the Rosary and saints Dominic, Catherine of Siena, Peter the Martyr and Philip Neri.
The fine painting of Neapolitan origin has been attributed to a follower of Sebastiano Conca. On record since 1737, in the foreground it depicts the figure of St. Philip adorned by a precious planet. At the top the depiction of Our Lady is similar to the style of Conca.

In the fourth chapel, granted to Filippo Di Falco, the archpriest of the mother church, is the Marriage of the Patriarch Joseph with the Virgin Mary. The work is very close stylistically to the previous painting, and has been positioned on the altar since 1741. Further on at the end of the transept is the interesting late-baroque Stucco chapel built in 1733, which has four columns, two of which are twisted.
The niche contains a statue of the Immaculate Conception made in 1711 by Giovanni Villamaci, originally from Messina, and his sons Giuseppe and Agostino. Opposite the transept, the stucco altar that houses the wooden statue of Our Lady of the Light “expected from Malta” in 1741 was built in 1732 by Raimondo Guccione from Vizzini in the same style as the one at the end of the transept. The statue shows Our Lady with the Baby in her arms, being offered a basket of flaming hearts. At the base is the “mouth to hell” from which the Mary’s merciful hand is saving a soul.

The presbytery was decorated with majolica tiles also from Naples in the mid-nineteenth century. It contains the main altar, a fine work built in 1861 along with the wooden choir stalls at the expense of Canon Giuseppe Di Maria, who is depicted in a bust to the right of the entrance portal. On the conch of the apse there is a wooden Crucifix attributed to the school of Brother Umile from Petralia (17th Century). 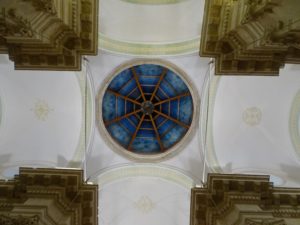 On the vault of the church, at the bottom of the dome cladding, there was a painted composition more than 50 square metres wide on wood with canvas inserts representing the Coronation of the Virgin and the Holy Trinity. This was attributed to Simone Ventura (Chiaramonte Gulfi 1700-post 1763). There are still the paintings of the evangelists John and Mark and the roundel with the Coronation of Mary.

From the transept, near the sacristy, you can access the Crypt of the Confraternity of the SS. Viatico dei Uomini di Campagna called of the Workshop of the Holy Viaticum. Built in 1769 to a design by the architect and priest Giuseppe Alessi (Avola 1739-1824) for the members of the fraternity of the same name, it was modelled on the Capuchin Crypt in Palermo. The interesting building contains twenty-six niches with stone purgers and seats. The altar was at the end, and the ossuary underground.

To one side of the apse at the end of the right aisle, is the Chapel of the Holy Sacrament with three altars. Started in 1753 and completed in 1781, it contains elegant rococo stucco work. It is accessed by a fine gate made in 1791 by Girolamo Muccio and Gioacchino Bellomia, blacksmiths from Avola. Inside the chapel the vault is decorated with the Sacrifice of Noah and the Easter Lamb, attributed for their style to Domenico Provenzani. The central altar has been reworked in a neoclassical style, and rests on a raised base covered by eighteenthcentury Neapolitan riggiole floor tiles, the same as those used for the baptismal font. At the sides of the altar are the Institution of the Sacrament of the Eucharist and the Cleansing of the Temple, paintings donated in 1783 by Antonino Sirugo of Avola, Baron of Meti and Santa Domenica. Leading on from them on the walls there are oval paintings with the Divine Sacred Heart and the Divine Shepherdess, both similar in style to the previous two.

In 1778 the side altars of the precious chapel were decorated with “panel of pure gold” by Michelangelo Cunsulo of Palermo. In the left-hand one the Crucifix “repaired and painted” by Cunsulo was placed. This interesting statue had been made in 1707 by the Avola statue maker Francesco Guarino. The head and arms rotate, and it plays an important role in Easter celebrations such as the ceremony of the “Seven Words” and, on Good Friday, in the processions of the “Dead Christ” and the “Mysteries”. The painting of the Deposition by De Fam: Maggiore (Minor) Pingebat 1788, a work based on a drawing by Olivio Sozzi, was placed to the right of the chapel on the altar dedicated to Our Lady of Sorrows. The church also houses the wooden statue of Our Lady of the Assumption, which survived the earthquake of 1693. The precious effigy was commissioned in 1612, following the precepts of the Counter-reform, by the Confraternity of Saint Anthony of Padua for the homonymous church in the old city of Avola.

In 1889, after the demolition of the Church of Saint Sebastian, the Martyr’s reliquary with his effigy and painting were taken to the church. In 1900 Francesco Lo Turco of Catania made the eighteenth-century style ferculum, or platform, to carry the statue of the Saint in processions. Saint Sebastian is celebrated on the second Sunday of May, with the characteristic cursa rê nuri race. On 20th January, the feast-day for the Church, another race starts from the ‘Old Sea. Over the chancel the organ brought there is engraved with the date of 1745 and the signature of Francesco La Manna. The latter was an organ maker in Palermo, who had signed the agreement in 1744 undertaking to make an organ identical to that “of the Holy Jesuit Fathers’ Casa Professa”.